There's a new lady in my life. It just wasn't working between us. You're too needy. I've spent at least $400 on you in the past few months, and without insurance it would have been thousands! Don't even get me started on the emotional distress. Its over. I've found someone better.

Sure, she cost me a little more up front, but not by much. Plus she's really light weight, too. Oh, don't give me that, I wasn't calling you fat. Honest. Not to mention how grouchy you've been these past few months. You won't even let me do the things I enjoy. You're out of here. This new girl, well, I get to ride her several times a week if I want to. 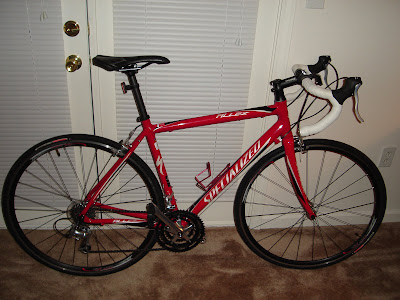 Today has been a great day. I found out I could get my new bike for ~$200 cheaper than I originally thought I would, bought it, and got out for a 2.3 mile run!

I ended up picking up a helmet, gloves, biking shorts, an extra tube, bottle cage, and a tire lever as well. All in all, the total was less than I was planning to spend on the bike alone! Pretty sweet deal, huh? I can tell you're jealous.

I ran into a guy I run with at the bike shop too; he's starting triathlons in '08 and just bought a bike last week. The same one, actually. He has good taste! Sounds like I have someone to ride with already!

Running was good today. I ran a little quicker than I planned, but so far I'm not paying for it. In fact, my hip is feeling wonderful! Hopefully it stays that way after the run 'sets in.' Tomorrow is an off day with regards to running, but I might be riding with Brian and then swimming in the evening. The every other day thing seems to be working now, as long as I keep the build nice and gradual.

And last but not least, I really want some name suggestions for the bike, not joking! I can't believe you passed up the chance to give something a trashy name earlier, Marcy, are you feeling ill?
Posted by Tri+Umph at 5:31 PM

That is one sweet ride! I'm glad to hear that you got such a great deal on it because I will confess that I am a "last year's model" guy as well and proud of it. It sounds like that hip is finally starting to treat you better as well and things are really looking up.

Names?? Hmmm... I'll have to think about that one.

OHHHH! AHHHH! She's a beaut! Just don't ride 'er too hard, since she's new and you're all excited, you don't wanna get all sore :)

Gorgeous addition to your life! What fun!

Love Dave's suggestion for the name.

Oh very cool. Congrats on getting Red. or Slick. I love that line where you called Helen fat. What name would be an updated version of Helen? I looked it up. There are actually many "modern" versions and variations. How about Ella?

Sorry!!! I was just too busy wondering if you were going to take her out in the winter! LOL

Hmmmmm the color red reminds me of Roseanne Barr for some reason ROFLMAO!! But I don't think Roseanne would be such a great name for a tri bike. The color red also reminds me of Christina Aguilera (excuse me, X-tina :P) and she's trashy so maybe I'd go with that . . .

She is gorgeous!!! (I'm catching up on all the blogs I've missed, if you can't tell...hehe. I've missed reading yours. Good times!)