This morning was a blur of numbers. Big numbers. Numbers bigger than I wanted them to be!

Yes, I went to look at road bikes. Entry level road bikes. The cheapest road bikes each of the three bike shops in town had. The result? Well, here are the three I'm considering if I decide I can live off of rice, PB & J, and chicken sandwiches for the next few months.

Here's the first one I looked at. At this shop they didn't take it off the shelf or anything since I wasn't buying anything today. The shop had a fair selection, but this was the cheapest bike they had which could be considered a road bike. The employee I dealt with, Brad, was very informative both regarding the bike and what else I would need to start biking. After looking at reviews online, it seems like a good bike. The main complaint I've seen is that the stem creaks.

At the second shop, this was about all they had for entry level bikes. They didn't seem to have a very big selection, but for road bikes this was it. Its a replacement for the Trek 1000 which was a very popular bike. The main complaint I see in online reviews is that it is very noisy. This shop didn't do anything with used bikes, either, so this is as cheap as it goes at the second shop. 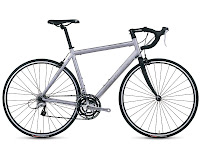 At my third and final shop they had a really good selection. But for road bikes, it was all about the Specialized Allez. The current year's model was a little ways above my price range, but they also had some lightly used ones! They rent out bikes, and sell the bikes from the previous season for 20% off, and happened to have this one for sale. According to Rick, the guy who was helping me out, these bikes are used very lightly and it probably has no more than a couple hundred miles on it. Also, maintenance is performed every time they get back from being rented. I know I need to be leery about the used bike, but it seems like a fairly good deal for a starter bike.

Rick was very useful at this shop, and let me go out in the parking lot and ride it around to get a feel for it. He adjusted the seat to give me a better fit on it as well. He also talked a lot about sizing and he really seemed as though he had a passion for biking. Looking at online reviews, there are a lot of good things said about this bike. A lot of people are saying its the fastest bike in its price range, but that it can feel fragile. I'm thinking since I don't weigh much that this negative could almost be canceled out? I'm not sure. I'm going to give myself a week to really think about this.


Between the three bikes, I'm leaning towards the Specialized Allez. I'm not sure if its because I actually got to ride it, or because Rick was very, very helpful. Regardless, it seems to be the best, and between the bikes it seems the cons matter least for this bike for my purposes. The only thing I'm set off by after this morning is the prices. I was hoping entry level bikes would be a little bit cheaper, but theres nothing much I can do about that.

If you have experience with bikes, let me know what you think! I'm all for input right now, lets hear it!
Posted by Tri+Umph at 1:54 PM

Nice! I'm supposed to get my first road bike for Christmas.

(Are we living parallel lives?)

I am about as good of a biker as I am a runner AND I am really cheap...so take this input with those qualities in mind... I bought a hybrid bike with the basic stuff - not to heavy - and not too expensive and then put aero bars on it - it was about $300 in all and has lasted about 7 years of races. Check out some of the hybrid models too - might be a happy medium until you turn pro. :}

Oooo I can't wait to shop for my first road bike!