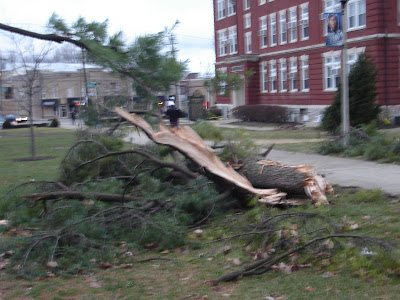 Last night some serious storms ravaged Kentucky, along with nearly every other Southern state. I had heard that Tennessee got hit really hard about the time I was going to bed, but as much as I love a good storm, I told myself "I'll just go to sleep, if the storm is worth watching, it'll wake me up!"

Was I right? Yes. Very yes!

Around 2am I woke up to one hell of a storm. Lightning was closer than I'd like (especially since my bed is by the window), it was raining like I've never seen, and the wind was blowing about 50 MPH with gusts around 70.

The power was out when I woke up, but came back on shortly. When it did, I fired up my computer to see what sort of warnings we had. Flood warning. Tornado watch. Tornado warning.

Wait. What? In February? A tornado warning? Yep. A tornado was spotted 15 miles north west of Richmond, which is a roundabout way of saying "right outside of Lexington." Luckily it stayed outside of Lexington, and I haven't heard anything much about it. But just because the tornado didn't hit us, doesn't mean there wasn't damage.

During my run this morning I took a little tour of the area to see what went on. The first thing I noticed was the tree just down the road (100 feet away) was uprooted and laying on its side. Then I head around town.. most of the stop lights weren't working. The wind tore them apart, I guess? They all had crews working on them, with police guiding the traffic.

Throughout the run there were branches all over the sidewalk to avoid, the wind really demolished a lot of trees. It also started to rain again during the last few miles of my run, really, really hard. It just added to it all, really, since a few of the roads were flooding during the last couple miles of my run; I'm sure the drainage systems were still backed up from last night. 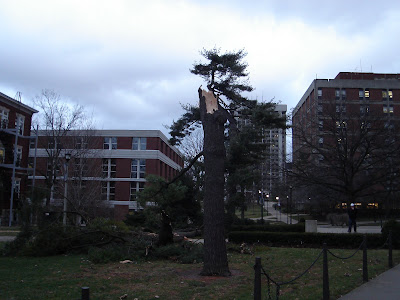 On campus I ran past several trees that took a direct hit from lightning, huge trees split in half; these were just a few hundred feet from where I go to class. Towards the end of my run there were a few roads blocked due to trees laying straight across them; all with workers trying to cut them apart as soon as they could to open the roads back up. All of this just a couple blocks from home. 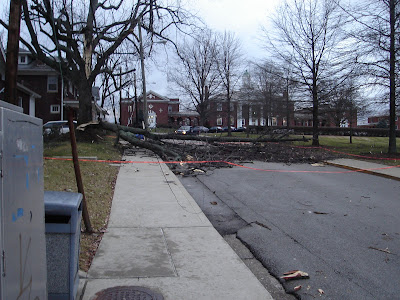 Despite all of the damage around town, it was a very enjoyable run. Nobody (that I know of) was hurt during the storm, and it was a great display of what mother nature can do when she means business! Also, running in the rain is always a plus, right? 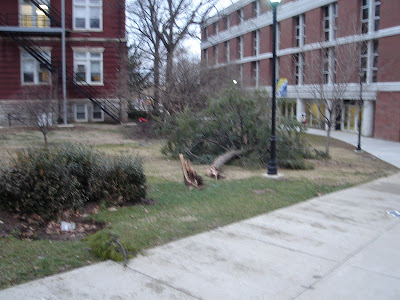 On my way to teaching tonight I may take pictures of some of the trees that were hit, since words can't even come close to describing what it all looks like! Update: Pictures added!
Posted by Tri+Umph at 4:31 PM

Labels: Running in the Rain, Storm

Dang!! I'm surprised you didn't run in that weather :P What? It can't be that much different than running in sub zero temps, right? Cars sliding off the road, trees coming down around you? What's the difference? LOL

Oh my, I'm glad you are safe. That is a little unnerving seeing all that damage so close.

Holy cats! I'm glad you're safe -- I've been hearing reports all morning and yesterday about the aftermath.

Wow, I'm so glad you and everyone you know is all right. Congrats on going out for your run anyway! (I knew you would :-))

Wow, good luck out there. I hope everyone you know and love it safe!!

EEkk! I'm glad you are alright. In 2005 one of the lovely hurricanes dropped a tree on my car. It sucked.