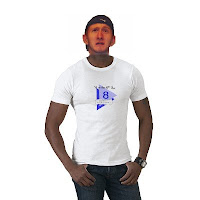 This race has been the talk of the community for the past month or so. Mostly because its put on by the best (most lenient?) race director out there!

A couple days ago I got my event T-shirt. I swore, up until this moment, it was called "An 8th on the 8." I thought, "No problem! I can run an 8th of a mile!" But then I looked at the T-shirt more closely. Crap! EIGHT on the 8th?! You want me to run how far?! Luckily, I had a camera at hand when I made this realization!

The crowd support during this race was fairly minimal. It consisted mostly of pre-occupied students in their zombie-like daze in the week before finals. I assume they were out there to cheer on someone else, because they barely even noticed me zoom by them. Unless I'm just that fast!

Not many runners were out there. Fewer than my last race, anyways. Although, even those that I saw were clearly not cool enough to be in on this VIP race.

After finishing, since nobody else in town ran the race, they gave me all of the prizes immediately after the finish. 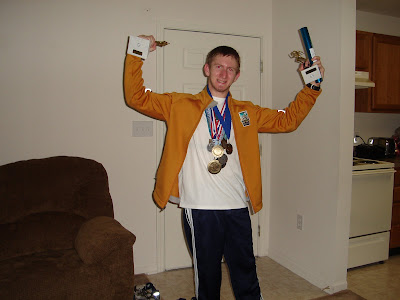 Do I plan to do it again next time? You bet! I wouldn't miss out on a race like this for anything. Thanks for putting it on, Nancy!
Posted by Tri+Umph at 11:43 AM

Great post, Doug. Funny, I had the same experience -- few supporters, low turnout. But I missed the water stations -- they must have set up on the parallel course. No problem, though, because I finished at my own, personal, well-stocked water station and had chai, bagel and cream cheese, and a grapefruit. Nice!

hilarious post! nice work! you didn't ride your bike did you?

That picture is going to give a lot of people nightmares. Great finish!

OMFG I AM DYING of laughter of the half Doug half man steak picture!! Dude you deserve a trophy just for the C&P job HAHAAHHA!!

I didn't think you were going to do it? FREEKING AWESOME JOB HOMIE!!! Still WAAAAAYYYYY faster than I could ever muster LOL

Hey -- you look as buff as I do You must be doing the same arm weight routine! (And way to go on the run).

Great race report! Love the medals you got! You must have swept the whole race!

Excellent race -- clearly you deserve all those prizes!

After I read your post, I sat down my laptop and proceeded to bow repeatedly to you. 8 miles at that pace after a few months off. Way to go!

I love your report. Thanks so much for all the support of my little idea. We'll definitely have to do more.