No, not the movie with the talking animals! Sure, there are dogs involved, but its much better!

I'm heading home after class today. I'll admit I'm dreading the 7 hour drive, but am really looking forward to seeing family for the first time since early August! My friend Susan is probably (better be!) coming down to visit since I'm home, and my friend Jonathan (now my sister's boyfriend) will definitely be there. We have a big festival in my home town every year called Harvest Days. Well, its big for us, since its a town of about 4,000 people. 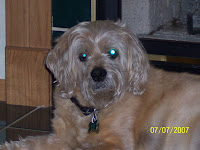 Besides getting to see people, I get to see my dogs for the first time in almost two months! Now these aren't just any dogs. These are quite possibly the best dogs in the world. Now now, you'llow, tell me "But Doug, they're both mutts! They can't be the best!" but you couldn't be more wrong, because they do awesome tricks and Sparky's whole back half wags when I get home. Then you'll say "Doug! Its so weird how the female dog humps the male one whenever they get excited!" and, well, yeah you're right. Thats pretty freaking weird, but pretty funny to watch people's expressions the first time they see it happen.

Tomorrow morning I'm working at the 5k race my dad helps organize. Last year I wrote a computer program we run on a lap top which compiles all the results for the race. Its pretty similar to how non-chip timed races work. You hit a button when they cross, then match up the numbers with the times by entering them in order. This one just has a nice graphical interface and its easier to tell if you make any mistakes.

It went extremely well last year, so they want me to handle it again this year! So well, in fact, one of the guys who was doing the other timing (we had two systems in case mine flopped, because it was the first time) told me to patent my system and charge race directors a fee to have me do the results at their races. Now, I didn't go ahead and do this. I don't have time to go around timing races. Plus, if I'm at a race I want to run in it!

After getting done at the race, I'm sure I'll be plenty revved up about running after watching the top guys get amazing times, a lot of people get PRs, and the pure joy on the faces of the first time finishers!

Once thats over, you know what time it is. Thats right. Its running time. I can't wait! My hip is feeling really good today, I daresay it might even be back to normal, but I won't carve that in stone anywhere until I run tomorrow.

Have fun at home!

Have fun!! Sounds like it will be a great time ;D Good luck with that run! Let us know how that hip holds up ;-)

No worries, Marcy. You'll be hearing more than you care to hear about my hip very shortly!

Have fun Doug! Enjoy the dogs, your stories put smiles on my face, thinking of my Training partners:) Can I have your program? Living in the far north woods, we just received internet not too long ago...timing chips? please! (just kidding about that internet thing...)

Love the puppies, but I assure you that mine is the best. (o;