You have all heard of the horrible conditions which occurred during the Chicago Marathon this year. The last numbers I have heard is 302 were hospitalized, and one man died. I feel horrible for these people and their families, but am very relieved all my family and friends are safe. Also, I cannot even begin to imagine how frustrated those of you must be who were not given the chance to finish.

We all have our stories from this memorable race. Here is mine.


Before the race, everything went very well. Everything on race morning went exactly as planned, and I got to the front of my starting corral with hopes of catching my pace group. The temperature was comfortable at the starting line. When we weren't running and the sun wasn't on us yet. This made me a little nervous. 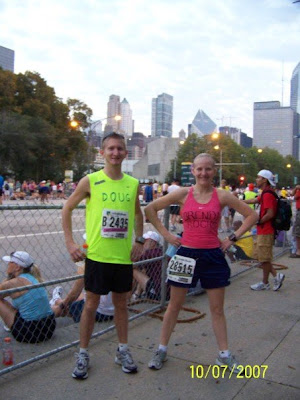 Me & my sis before the race

Once the gun went off, everything felt great -- for a little while. I saw my parents on Randolf Street Bridge (thanks for the suggestion, Tom!), and they even saw me too! Shortly after, I heard my track and cross country coach from highschool. Yes. Heard. Over everybody! Coach Lane has a voice that really carries!

During the entire race, I would hear my name every 100 yards or so. Especially at the beginning! I highly recommend getting a neon shirt and putting your name on it, everybody makes you feel like number one! At one point another runner yelled out "Who the hell is Doug?! My name is Doug!" Good times before the race got serious! 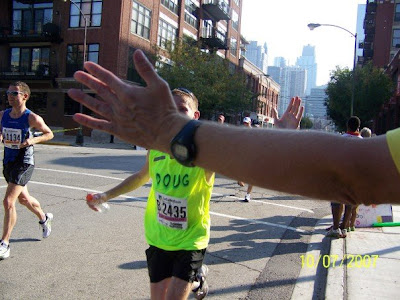 High five!
And man did they get serious after the half. This is right where I started to fall apart. My half marathon split was 1:31:00, a bit behind my 3 hours goal, but not much. After the half, though, I lost the shade of downtown Chicago, and the sun started beating down hard. My pace slipped slowly from 6:52/mile to 7:30's between the half and 20 mile mark. I knew I was slowing down, but couldn't help it. I had to, or else I wouldn't be able to finish. The heat was simply too much.

During this part of the race I was constantly calculating and recalculating how fast I had to run to still qualify for Boston. It was still within reach, but was slipping every mile. Around mile 22 or 23, the 3:10 pace group (Boston qualifying time) passed me by, and I made a strong effort to stay with them. This lasted about 400 meters, then slowly they ran away from me; which triggered my mental funk. It was like a dream running away from me.

I stuck with it for a few miles after this, but then completely fell apart. Miles 24 and 25 were absolutely horrible. At one point I made the horrible decision to try and stretch out my quads which were falling apart. The result was my right hamstring turning into a knot, but I walked it out after a little while. I was reduced to a survivor's shuffle, taking about 10-12 minutes per mile. I would walk through the entire aid station, drink two gatorades and a water, then dump a water on my head. Although, the end of each one was really, really motivating! I would start looking like I was about to give running another shot, and a big group would start cheering me on to get me going. Sometimes it felt like I couldn't have made it without them.

Finally with about half a mile left, I broke my mental and physical funk. It was go time again. My legs were feeling okay, and the crowds were 4-5 deep as I shot up the last hill. I saw my friend Lewis halfway up the hill too! Right after the hill, I hauled down the final straight away and finished with some pep in my step. The last half mile averaged 7 minute pace!

My finishing time was 3:21:22. I have heard my official finishing place was 721st, because a friend of mine checked it right after I finished. Since then, they have taken down the places since it was a "fun run" and "fun runs" apparently don't have an order that the runners finished. If I count the race as having the 45,000 that signed up, this means I finished in the top 2%! Oh yeah! 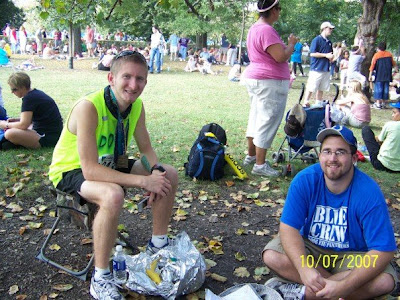 Me and Lewis after the race 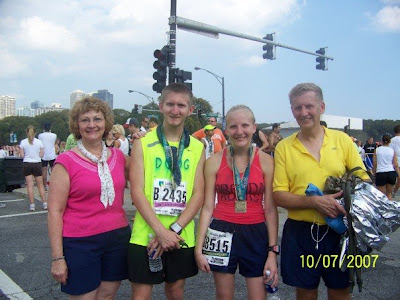 Family picture!
After being finished for a while I began to wonder: "Where's Sister?" I got the text she finished, but she wasn't showing up at the meeting area. Now, I had a decision to make; albeit an easy one. There was time for one of two things: catch my plane, or find my sister. Eventually she called us on someone else's cell phone, and we found her. The first thing she said was "Why the HELL would you do that twice?!" but since then I think she's starting to see why!

I missed my flight to Kentucky, but ended up spending a relaxing evening with family instead -- much better than being rushed while hobbling through an airport. I caught another one today, not a big deal.

All in all, I'm very happy with how I did. This was a very memorable weekend, and 20 years from now I have a feeling this race will be remembered.

"Do you remember the year Chicago was canceled?"

Update: For those interested, here is the Garmin data from the marathon. The signal was bad around the buildings, which made the miles longer. I added an extra lap to try and sync it up with the mile markers, but it kept getting out of sync.

Wow! What an amazing story. Congratulations on finishing. That is an amazing time, with or without that crazy heat! You should be very proud! Have a wonderful week!

Awesome race!! I couldn't believe how fast you were going in those conditions. I'm glad that you made it out alright. That had to have been an experience to say the least.

I can't believe you even stopped too?!?!
Good God I'll have to run with you (excuse me . . .behind you) maybe you'll make me faster LOL

Glad you finished! Your time is incredible!! You will get that Boston time next time!! Great job!

I watched you the whole way and cheered. Have you seen the estimates that the heat added 30 - 60 min for some? You probably would have easily BQ'd if not for the awful conditions. Great job hanging in there. I hope you are resting and recovering well.

Doug, You did an amazing job under the circumstances. The heat took a toll on us that we'll forever wonder about. A next cool marathon will easily get you your BQ you're so capable of running. Recover well!

doug, a truly amazing time. it was great talking to you again. if you're like me (and i'm starting to think you might be), you're already looking for the next opportunity to crack 3:10 or 3:00. I hope to see you at chicago again, but by then we'll have our BQ covered!

Well done, an amazing pace for such a bad day. Boston is within reach...the next time!

You know you'll be back for more!

What a great run... at such a memorable run.

Well I am glad that you survived as well s finihed. The blogs on the race have been mix of both finishers and non-finishers which has been pretty humblng.

Way to push through even in craptacular conditions. It was hotter than hades out there. I'm impressed with your time, even if it wasn't your ultimate goal.

Are you running a back up 'thon to try and qualify?