I made it back to Kentucky in one piece.

Nothing too eventful about the trip, except a gas station that was out of gas. I went to fill up and the gas literally dripped into my tank. After five minutes I had one dollar worth of gas! I noticed lines were actually forming at all the pumps, so I'm assuming that was the case at all the pumps.

Since I was traveling all day, no running or biking happened at all. The plan is to do an ab workout tonight before I hit the sheets, so then I can at least count today worth something!

Tomorrow, though, I'm planning to get out and run 5 miles; the laziness has to come to an end! Also, I'm going to go drop a bunch of money at the bike shop. I'm giving into the suggestion every serious cyclist gives me, and I'm going to get clipless pedals. Supposedly they make pretty much anybody 10% faster just by using them, since you're also pulling up instead of just pushing down.

The only problem is that its really going to increase the chance of me falling on my face. And not only that, when I do fall on my face, I'm going to be going 10% faster when I do it! Don't worry, I'll be sure to post pictures when the inevitable fall eventually happens. Ultimately, though, if I want to be serious about biking I need to get clipless pedals. And in my opinion at least, its better to start developing the technique and muscles for it sooner than later.

In unrelated news, my appetite is still in overdrive from my 2-a-day workouts earlier this week, and I just consumed an entire pizza. 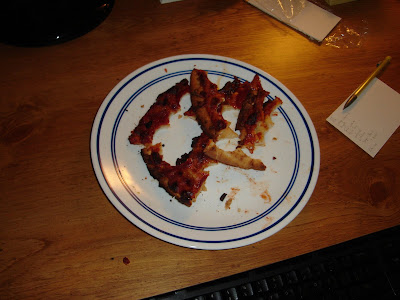 Okay, so I lied a little, I left the burnt crust!

Nic - The prospect of a pacer is making me lean more towards Racine already, even if its not a guarantee!

Nancy - You know, I almost forgot about the bug that was going around my house. I bet you're right, the old immune system was using all my energy to keep it at bay! So far, no symptoms at all other than being tired and I'm away from all the sickies now!
Posted by Tri+Umph at 9:21 PM

Well, that pizza fit on plate? I could eat a whole one of those!