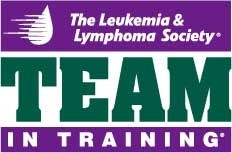 The string of events leading up to this are kind of strange, but here goes...

About a week ago a friend of mine at Todd's Road asked me if I would be interested in Team in Training (TNT). I was just heading out, so I asked her to remind me about it again at swimming the next day. She didn't, so it mostly slipped my mind. I forgot about it for a little while.

Now, last Friday Half-fast had a hilarious post that had a lot of Lance Armstrong videos. I had little to do this weekend, so I started watching other Lance videos on YouTube. Learning the details about his story, brought back the thoughts about Team in Training.

For those of you unfamiliar with TNT, here it is in a nutshell. Its an organization that completes endurance events (marathons, century rides, triathlons) in order to raise money for Leukemia and other blood related cancer. Since they started, they have raised about $850 million. In return for helping raise money (mostly by asking for donations from family/friends), I get to meet a ton of great people, receive professional coaching, and travel expenses are covered for my event.

It seems like something great to do. I told myself a few days ago that I was going to do it, unless I could come up with one excuse that didn't suck. Any excuse I thought of, well, sucked! So I thought about it some more, and convinced myself it was something I had to do.

I always look at myself as being generous, but my actions don't add up (okay, so I give a dollar to salvation army every year and usually hold doors for people). Its about time I change that. Its about time I become part of something bigger than myself.

Last night I submitted my information to TNT, and am going to go to their informational meeting on Saturday morning. The ball is in motion. Lets do this!
Posted by Tri+Umph at 11:13 AM

WHOOO HOOOOO!!! That is AWESOME Doug! Nothing like doing something you love to do AND helping others at the same time.

I'm familiar with TNT (as in what they do) but unsure how it all works. Do you just collect X amount of donations from peeps, hand them in, train with the TNT's help, and then race? You can count me in for a donation if you decide that's the way you want to go ;D

Congrats - that is an awesome organization. I met some cool peeps at my race that were all TNT'ers.

Keep us posted on your donations needs. I'm usually good for a few buck-a-roos!

That's a big step. I hope it will work out for you. I think there are definite pros and cons. I know you will think it over thoroughly and come to the right decision. My sis in law did that for Chicago and I worried about her a little with the fundraising ( I think you have to commit to the full amount and give them a credit card to back it up ). She really wasn't in a position to do that but did it anyway. I think it came out okay although she would probably never tell me otherwise, and she certainly raves about the organization and the support she received. Good luck with it, Doug!!

If you'd like to fel better about yourself, you can start sending me a dollar every week. I guarantee it's a good cause!

Good for you! I trained with TNT for the 2006 Chicago Marathon. It was one of the most rewarding things I have ever done...

Let me know when you get your donation page set up!

Oh that's awesome!!!! I was looking into joining TNT before, thanks for reminding me to look into it!